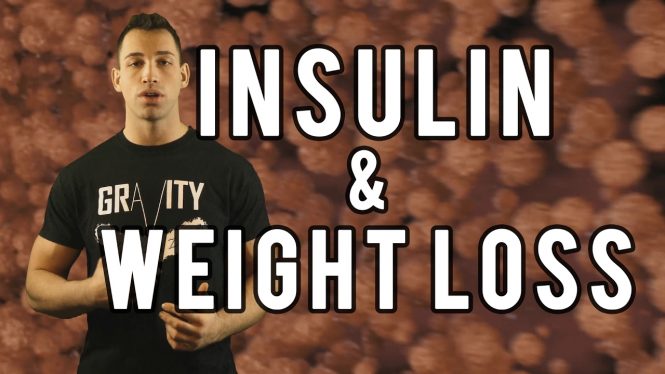 Everything you need to know about Insulin and Weight Loss. In this video I reveal how to control and lower insulin resistance. Lower your insulin levels and battle diabetes with diet and exercise.

Insulin and weight loss. What exactly makes these two so dependent on each other? If you dig through a little bit of fat loss research you’ll see right away that insulin is very closely connected with burning fat and losing weight. In fact without reducing insulin there is almost no way we can burn a substantial amount of fat no matter how hard we exercise and diet. And even though most people have heard about insulin spikes not being good for weight loss the average person doesn’t truly understand why. Well my hope is that today I can explain this in a way that anybody can understand. It all starts with you eating food. When you eat food the chewed up food particles get broken down further in your stomach into very small parts and then they pass through your intestines at which point your body absorbs and breaks down those nutrients and calories again and dumps them into your bloodstream. These broken down nutrients can’t just jump into the cells that need them for their daily functions without some help. That’s where insulin comes in. Insulin is a hormone secreted by your pancreas and it gets released into your bloodstream when your body senses that blood sugar has increased. Very high blood sugar levels are not good for you and your body knows this. So insulin acts as a bridge between your cells and the sugar found floating around in your blood. Without insulin your blood sugar would be very high because your body wouldn’t be able to get that sugar into the cells. This is actually pretty much what type 2 diabetes is. When people are insulin resistant which means that insulin isn’t doing its job they usually wind up being labeled as a type 2 diabetic which means that they need an external source of insulin for example either a shot or a pill to get their blood sugar down. So what does all of this have to do with fat loss and weight loss. Well whether you eat pasta brown rice or drink a can of soda all of it will eventually be broken down and it will be blood sugar floating around in your bloodstream. The only difference is that whole high-fiber carbs like brown rice will take a lot longer to digest which means that the sugar will be released into your bloodstream slowly while the can of soda will pretty much be released all at once. When it’s released into your bloodstream slowly you give your body a chance to actually use it overtime so you won’t require quite as much insulin which leads to less of it being stored as fat. Before insulin starts storing blood glucose into fat cells it will first store as much of it as possible into your liver for later use. The liver can only hold a limited amount of blood sugar and then the excess starts to get dumped off into your muscle cells. Now your muscle cells can hold more of this glucose then your liver can however it also has its limit. By building more muscle you’re going to be able to increase this limit and use more of the blood sugar for your muscles rather than storing it as fat, however again even the most muscular person on the planet is going to have a limit of how much of this blood glucose can actually be used by the muscles. Once that limit is reached we hit a point called spillover where the sugar that came from mostly carbohydrates in your diet will begin to be stored in fat cells in order to lower the sugar found in your blood stream to normal levels. So insulin is an anabolic hormone that causes weight gain and growth. The opposite hormone to insulin is a catabolic hormone known as glucagon which is released when blood sugar drops too low. Glucagon just like insulin goes in and acts as a bridge between the stored energy in your cells and your bloodstream. Except it has the inverse effect. So it pulls energy from your cells and dumps it into the bloodstream. Before your body will start pulling fat from fat cells for energy it will first pull that stored glucose from your liver and your muscle cells. This is why so many low carb diets work. When you don’t have that many carbs it’s easy for your body to use up the carbs stored in your muscles and your liver and then proceed straight to burning fat for energy. This is the same reason why ketogenic diets work. Except an added benefit to ketogenic diets is that your body becomes more efficient at using fat for energy which means more fat will burnt.