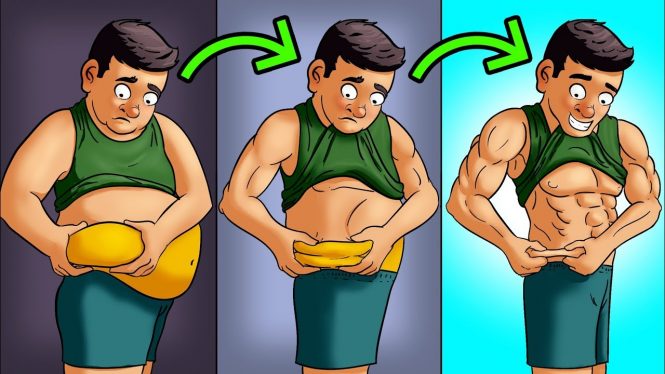 These are the 3 BEST Science-Based tips to lose belly fat & flatten your stomach fast. If you’re a man looking to get rid of your gut and you’d like to learn about what foods to eat or what workouts to do, you won’t want to miss this video. Learn why belly fat burning exercises are more than likely a waste of time and what exactly you should do instead to reduce your stomach fat.

Whether you call it a beer belly, a spare tire, or a muffin top, excess belly fat increases your chances of developing heart disease, type 2 diabetes, and metabolic dysfunctions. As your waist to hip ratio increases, hormones in your body like testosterone, insulin, leptin, and ghrelin go through a series of negative changes, creating a vicious cycle that makes it easier for you to store fat, and harder for you to lose it, and when your waist starts getting bigger than your hips the medical issues start becoming more and more of an inevitable reality. On top of the health issues having a gut just doesn’t make us look or feel all that great. But the good news is that just by making a few simple changes you can quickly drop belly fat, reduce the size of your waist, and turn this whole situation around. Now usually the first thing that beginners think of doing is to try targeting the area with crunches and situps. And the truth is that it’s very unlikely that you’ll be able to burn the fat directly from your stomach with exercise. For example, in one study only one leg was trained for 12 weeks while the other leg was not and there was no noticeable difference in fat loss between the two legs. (1) In another study, only one arm was trained for 12 weeks but there was no major difference in the amount of fat lost from one arm when compared to the other. (2) And when looking specifically at training the abs, the studies still show that performing abdominal exercises won’t actually help you spot reduce the fat that’s covering those abs up. (3) Now there was one very interesting recent anomaly study that did show otherwise and it found that participants that trained only their lower bodies experienced far more fat loss from their lower body, while other participants that only trained their upper body lost more fat from their upper body. (4) The researchers concluded that for the potential possibility of spot reduction working you need 3 things. Number one is high-intensity exercise, so for the abs that would be training them with heavyweights. This would be done to help release and mobilize the fat stores. But just because the fat stores are mobilized doesn’t mean that the fat will actually be used for fuel and if it’s not burnt through a process known as lipolysis the fat will return right back to where it originally was, so Number two, would be to follow up immediately with some kind of workout that burns a lot of calories like cardio or full-body interval training. And finally, the third condition is that you’ll have to maintain an overall calorie deficit. Now even though some of you may want to give this a try… there’s still no guarantee that you would burn more fat specifically from your belly because we need more studies to support these results. The majority of evidence still suggests that spot reduction is a myth and that overall body fat reduction that’s achieved mostly by following a good diet is the best way to lose belly fat so the first evidence-based tip is to shift your attention to burning fat by improving your diet rather than concentrating on burning the fat with exercise. Now as soon as I say that you need to have a good diet the first question that pops into everyone’s mind is what’s the best diet that’ll make me eat less and help me get rid of this gut, is it low carb or low fat? Nowadays most people assume that cutting carbs is the way to go. And the truth is low carb diets do have some unique advantages. Just by going on a low carb diet you’ll probably automatically put your body into a caloric deficit, but on a low-fat diet, you’ll most likely have to still track your calories to make sure. Another advantage is that some studies show that low carb dieting is more effective at reducing appetite and hunger than low-fat dieting(5)  Low carb diets will also quickly lower insulin levels which is important for fat loss because insulin stimulates the production and storage of fat and it prevents your body from burning previously stored fat. (6) But, even with all of these supposed advantages, the true determining factor that makes a diet plan efficient is if the person on the plan can….